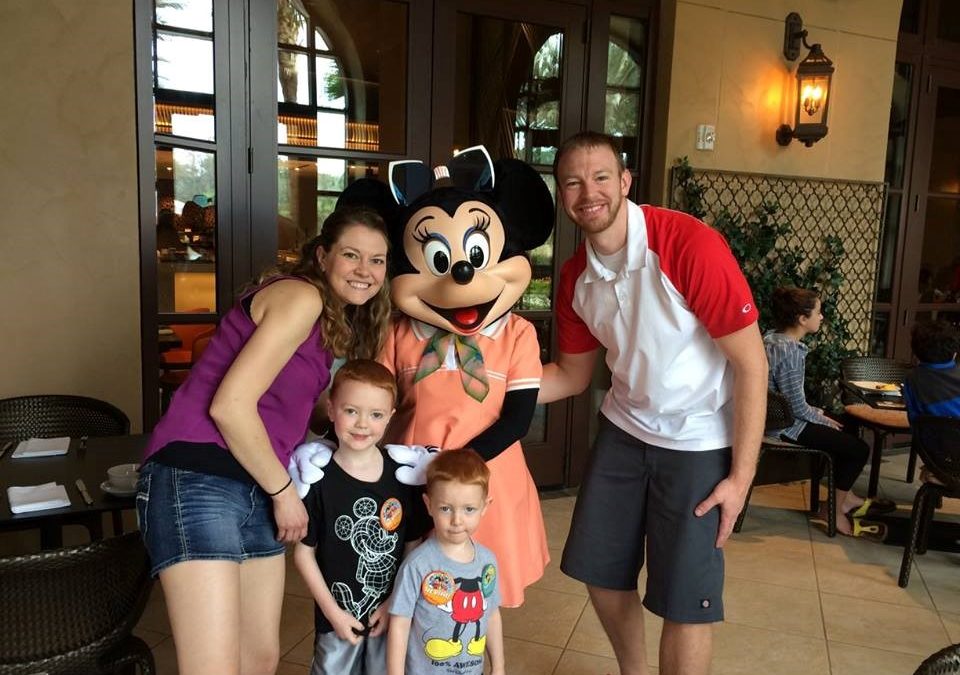 When it comes to finances, too many times I feel that we focus on the negative. I feel I often talk about getting out of debt, lessening your tax burden, and finding a way to pay for expensive endeavors like college and retirement. That’s why I thought it would be fun to write a series on the positive side of finances and focus on the many success stories I see in my business nearly every day.

My first choice was a young couple with children, Erin and Josh Van Roekel (this story is written with their permission). You can see this happy family on their recent trip to Disneyland in the picture above.

This financial success story actually began with the couple’s parents and grandparents planning and saving ahead. Erin’s parents started contributing to a 529 college savings plan as soon as the plans became available in Nebraska. Josh’s parents and grandparents funded Coverdell Education Savings Accounts and Uniform Gifts to Minors Act Accounts. Both Erin and Josh were strongly encouraged to apply for and utilize all scholarships available to them. They were also encouraged to save much of their earned income from their jobs during high school. In addition, both of them worked while they were going to college, with part-time jobs during the school year and full-time jobs in the summer.

Through the gifts and encouragement provided by their families and their own hard work, both Erin and Josh were able to graduate from college debt-free. Quite an accomplishment given that they both attended a private school.

After getting married (with no wedding debt), Erin and Josh committed to living on Josh’s salary while Erin went to graduate school to become a speech pathologist. After Erin graduated, they continued that commitment and used Erin’s salary to work on paying off their home mortgage early. This commitment allowed Erin to cut back to part-time after the birth of their first child.

As their family increased to four, the couple remained committed to living on Josh’s salary.  They are diligent about creating a monthly spending plan and sticking with it. The continued commitment has allowed Erin and Josh to not only pay off their home, but also to trade in their small cars for two larger vehicles to have room for their two sons and their dog. Both vehicles were purchased without debt after searching for the best deals.

Now less than fifteen years into their marriage, Erin and Josh continue to remain debt-free.  They are able to fund home remodeling projects out of their pocket. They also enjoy many fun activities such as family outings to Okiboji with their camper and jet-ski, Rose Theater performances, and many trips to the Henry Doorly Zoo (as well as the above-mentioned Disneyland adventure!).

You, also, can experience financial success no matter what your age or situation. If you stick to a budget, plan ahead, and stay committed, you can live a life free of debt and rich with experiences!